Large viewpoint over the Teruel Plateau

A geographical, cultural and economic crossroads, Rubielos de Mora offers a great viewpoint over the Teruel Plateau, and is known as the “Gateway to Aragon”.

Rubielos de Mora Town Council’s Tourist Information Office offers a range of services for guided trips to the historic centre: The Mediaeval Gates, the Renaissance Market, the Collegiate Church of Santa María la Mayor, the Carmelite Monastery and the Palace-Houses. They also offer a service for groups. 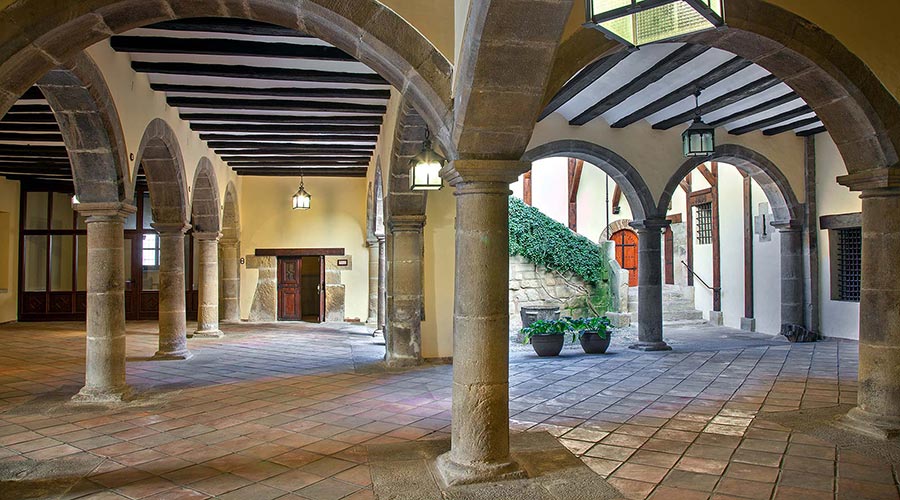 Rubielos de Mora, also known as Corte de Sierra has a great number of ancestral homes and notable buildings that make up its widely recognised Artistic Historic Site. (1983 Europa Nostra Prize). The preservation of its unique architecture has been one of the basic principles, making it one of the Most Beautiful Towns in Spain, for which it was granted a prize in May 2013.

The name of Rubielos de Mora comes from the Latin Rubus Idoeus, due to the abundance of blackberry bushes found throughout the region which added colour to the plain. When visiting it, it is highly recommended to get to know the former Collegiate Church of Santa María la Mayor and the great 15th-century international Gothic altarpiece kept inside it, dedicated to the life of the Virgin, as well as the Town Hall, a beautiful Renaissance building with a large open area on the ground floor that is highly impressive.

The Mediaeval Market has become established as one of the best attended traditions. It started in 1987 and has become a benchmark. This event aims to dramatise the rich artisanal tradition of the town. Rubielos de Mora has a great history in mediaeval trades. The result of this is the work done to preserve and refurbish all the buildings that has taken over thirty years and that has been done by the inhabitants. We would particularly point out the carpenter’s workshop, in which all kinds of rustic or Provençal furniture is manufactured and windows, balconies and the doors of emblematic buildings are restored. In Rubielos, there are still excellent stone professionals and the Guild of Professional Forgers enjoys recognised prestige in the eastern area for the design of bars, grilles, balconies, etc. There are also endless trades linked to the resources of the area, such as basket making, pottery, makers of canvas sandals and the traditional textile industry.

People attend the festival dressed in clothes and shoes from the period and visitors can see demonstrations of artisanal workshops on forging, pottery and making traditional wine. It is held in the last weekend of August and is complemented with performances by theatre groups and musicians from the area. Another tradition that dates back to 1620, are activities linked to bullfighting such as the Toro de Soga and the Toro Embolado. In addition to the above-mentioned events, the following are also celebrated in Rubielos de Mora: on 16th July, the Virgen del Carmen saint’s day; on 14th September, the Feast of the Cross, which coincides with the town festivals and that usually lasts for about a week; on 12th October, the festival of the Virgen del Pilar. Several religious pilgrimages are also celebrated.

The typical, traditional gastronomy found in Rubieles de Mora is linked to the produce from the land (cereals, legumes, vegetables, fruit, etc.) and to the breeding of animals (domestic poultry, lamb, small wild game, pork, etc.).

The star dishes of the area include stewed beans, stews, fried breadcrumbs, breadcrumb soup, pig’s trotters, rabbit and pickled partridges, stewed meat, or classic grilled Ternasco lamb chops. However, one should not forget that anything made from pork is also excellent quality here. Ham is the star product, either as classic Serrano ham or that of Teruel Designation of Origin. There are also packaged cold meats in marinade (with oil), as well as cured cold meats (longaniza, chorizo, salchichón, lomo embuchado and sobrasada), black pudding made with rice or with onion, and güeñas.

Other products from the land that are worthy of a mention are saffron milk caps (Lactarius deliciosus) found in plenty in the nearby countryside. These wild mushrooms or rebellones as they are known locally, are highly appreciated for their great culinary value. They also use black truffle (Tuber melanosporum), greatly appreciated for its aroma, as a gastronomic condiment and for its economic value.

In Rubielos de Mora, there is a surprising variety of landscapes: gorges in the Rivers Mijares and Rubielos, as well as farmhouses scattered throughout the area, which are highly recommended visits.

There are many activities that can be carried out, from skiing in the winter to horse riding, including MTB routes or hiking in the mountains to appreciate the majestic landscape of the Maestrazgo Mountain Range and to discover some of its beautiful places.

Mirador de la Cruz viewpoint; the peak of Cantalar, from where you can see most of the municipality; the channels of the River Rubielos, the River Estrecho, Matanzas, Bolaje Alto and Bajo Mountain Ranges, a unique landscape to the west of the municipality, Mas Blanco recreational-picnic area, Las Balagueras Reservoir, Santa Bárbara Hermitage, El Calvario Hermitage, La Fonseca Bridge (1670) and the Piedras Gordas picnic area.

Routes in the comarca

Pino del Escobón, which is perfect to do with the family, and is very well signposted and provided with rest areas. Fuen Narices is a spring in a beautiful woody spot – a pine forest with Scots pine (Pinus sylvestris) and black pine (Pinus nigra) in an environment that is typical of the Gúdar Javalambre comarca. The Caños de Gudar spring is an easily reached spot in a high mountain environment with thick pine forests, where you can walk along the paths from the water to the waterfall.