Walks along the greenways in the Basque Country

Mungia offers plenty of guided, educational trips, on which you will be accompanied by a guide who will adapt to visitors’ language needs.

The town also has diverse accommodation offers, ranging from hotels inspired by traditional local architecture through to rural houses in which you can enjoy contact with the town’s agriculture and livestock environment. 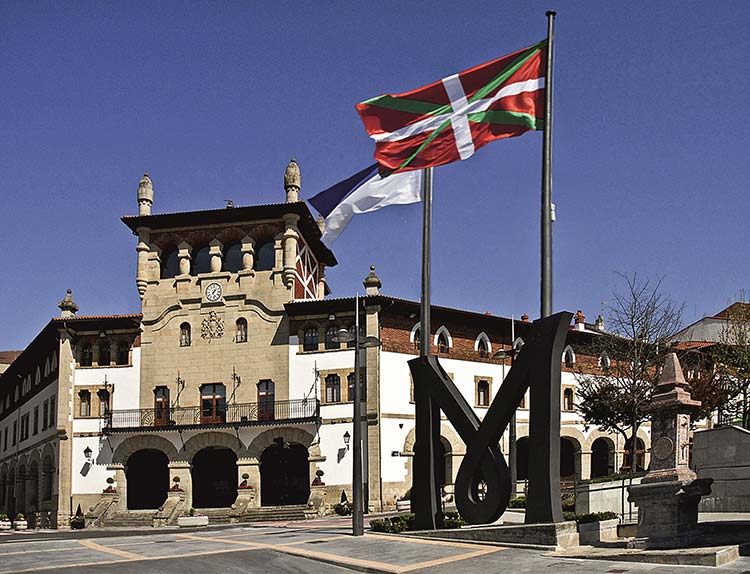 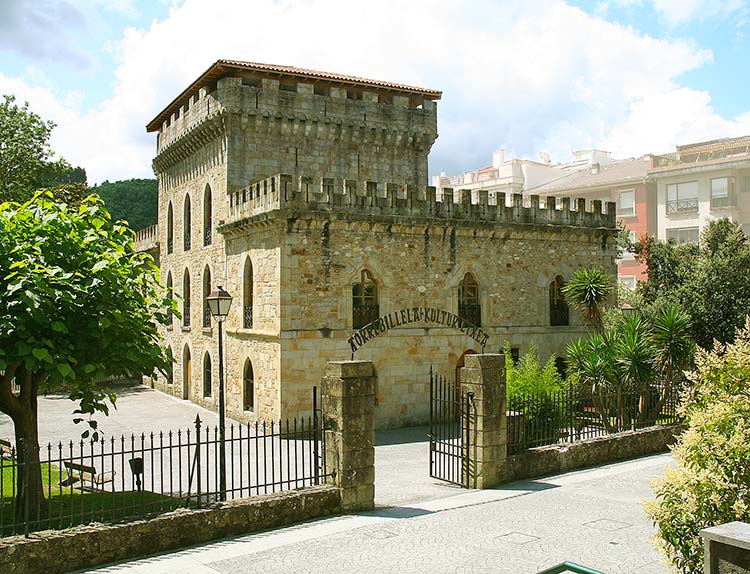 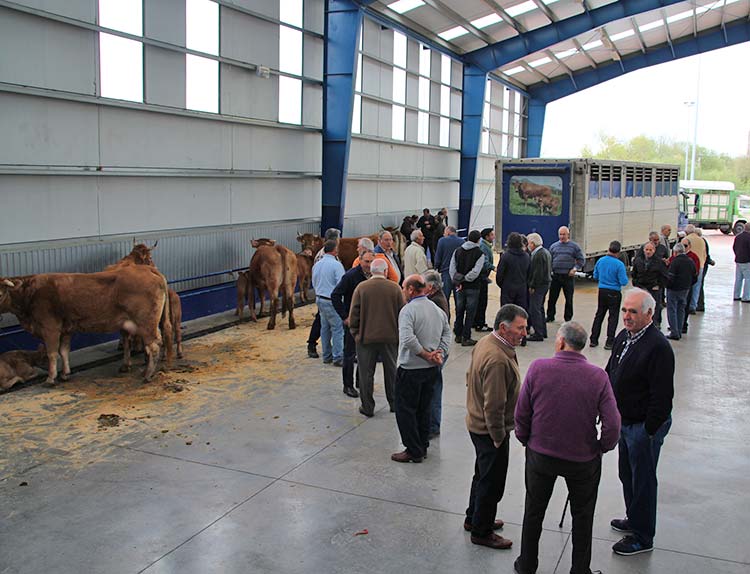 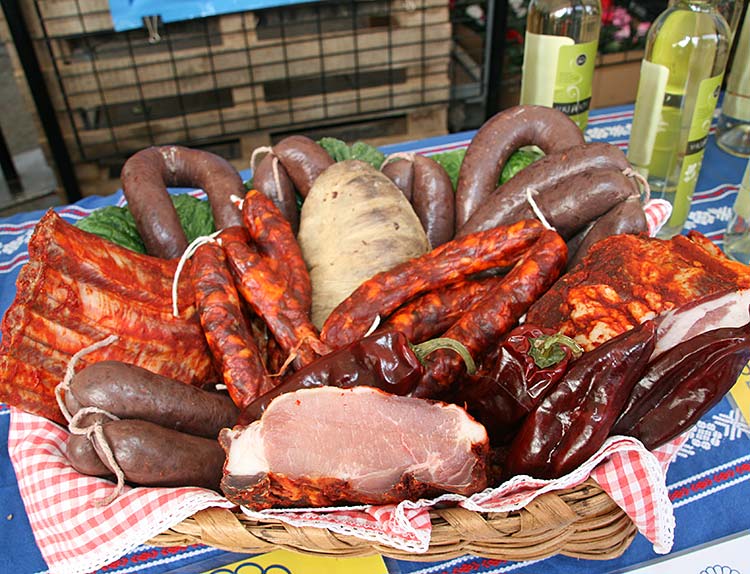 The first documented reference to Mungia dates back to 1051, when an abbot confirmed a donation from the Lords of Bizkaia to the Monastery of Cogolla. Little by little, the elizate (an early form of local government in the Basque Country) took on greater importance thanks to its being an ecclesiastic administrative centre (the existence of an abbot leads us to believe this) and to its location at a crossroads between the inland and the coast.

As a result of the fights of the factions and of the abuse by the nobles, the Lord of Bizkaia, the Infante Juan, was asked to make it a town so that it could be fortified and better defended. The town of Mungia was created on 1st August 1376, in the centre of the elizate of the same name.

The town and the elizate were independent entities, although they combined to achieve some services and improvements. Little by little, they did more and more things together and on 6th October 1900, they were merged by means of a ceremony.

In 1936, during the Spanish Civil War, Mungia was one of the towns that was damaged by the bombing of the fascist troops. The war put an end to the growth of the town, but at the beginning of the 1960s, the industrialisation process in the area attracted a lot of labourers.

During the time of Franco’s dictatorship, the resistance movement was based on citizen associations that served as umbrella organisations and helped cultural, sporting and education groups. In 1977, the first democratic town council was elected after the dictatorship.

The districts of Mungia are as old as the elizate. Each district, over hundreds of years, constituted a unit with its own personality. Each district has its own patron saint, a hermitage or place of reference and celebrates its own festivals. The borders between the districts, and even between the municipalities, are mainly marked by small streams, although at times there is no clear differentiation and only the locals themselves know where the border lies.

The Town Hall was opened in 1927 and was burnt down during the Spanish Civil War. Designed by Antonio Araluce and inspired by neo-Cantabrian style, it incorporates traditional features of Basque Country town halls; the wide portico open to the exterior, the use of bricks on the top part, the Gothic inspired ogival windows on the second floor and the split corbel and the great coat of arms of Mungia Elizate in Baroque style.

The Alkartasunaren Iturria fountain, created to reflect the union of the councils of the town and of the elizate. The symbolism of the fountain is reflected in the relief of joined hands “Biak bat eta biena” (“Both only one and for both”).

This was the centre of the economic and social life of Mungia. In the past, the phonograph for Sunday dances or the municipal band played in the bandstand.

In the porticoed square you can see 19th-century buildings. Each building was owned by one family with their business on the ground floor and their home on the upper floors.

This is an eclectic building that combines Neoclassical, Renaissance, Baroque and Gothic structures, among others. It could be considered a palace farmhouse as it had a vegetable garden and orchards which provided it with products making it self-sufficient.

This building is opposite Agirre Jauregia, and it was built by Antonio de Araluce and inspired by neo-Cantabrian style. The property caught fire in the post-war period and was reconstructed, adding on another floor.

At the beginning of the 18th century, Andra Mari was a church in a state of ruin. Its proximity to San Pedro meant that the resources destined to its maintenance were not used.

Between 1746 and 1748, it was decided to rebuild it with a project by José Zaylorda and Ignacio Vicente de Mendieta y Cebericha. A century later, in 1848, a new façade, which is still preserved today, was built using dressed stones, by an unknown author.

Today, it has become the centre in which the Mungialdea farmers sell their produce in the square on Fridays.

San Pedro is the church that has governed the spiritual life of Mungia over the last thousand years. The Lords of Butrón, who were its patrons, are buried in it.

The church was rebuilt after the Spanish Civil War, as it was destroyed by the militia on their withdrawal. During the reconstruction, the church was made larger.

Torrebillela Casa-Torre is the oldest civil architecture building in the municipality with mediaeval origins that have been maintained, and with plenty of added changes. It would seem that the original building was a simple stone tower, without ornamentation, which was five storeys tall and which was used for defence as well as for living in. Today, the building is a headquarters for the town’s cultural activities.

The Billela Mill is behind Torrebillela and is a symbol of its economic power and was the main mill in the town. In Mungia and Mungialdea there were and still are plenty of watermills.

There is a small building called Katetxea in front of Torrebillela. This building is the last remains of the mediaeval Beko Kale. It was the place where people had to go and pay their taxes to bring goods into the town. Today, it is a place for forums and new technologies.

The sculpture in honour of Esteban Urkiaga, known as Lauaxeta, considered to be one of the best Basque poets, is in Calle Lauaxeta. Lauaxeta was born on 3rd August 1905 in Laukiz, but he spent most of his childhood and youth in Mungia. He participated in the creation and later development of the Euskal Pizkundea group. He was a public speaker for the PNV, the Basque Nationalist Party, and after the outbreak of the Spanish Civil War, for the Basque Government. He was arrested in Gernika and killed by a firing squad on 26th June 1937 in Vitoria-Gasteiz. Lauaxeta’s remains were laid to rest in Berteiz cemetery.

Landetxo Goikoa Farmhouse can be considered the founding archetype of Basque farmhouses. This building dates back to the 16th century and is classified as one of the so-called Gothic-Renaissance farmhouses. Landetxo Goikoa has a quality of construction that was inconceivable for most farmers’ homes of the period. The farmhouse has been refurbished and integrated into the Izenaduba Basoa theme park as the house of the Olentzero, a character in Basque Christmas tradition.

January
18th San Antontxu
This is a festival with a great tradition that has always been linked to the trading of livestock, artisanal products, plants and fruit, as well as the traditional Euskadi chorizo and black pudding competition and the games of pelota. The days before and after San Antontxu, concerts, cultural activities, popular cross-country races, sporting activities, bertsolaris (Basque musical verses) and a singing championship are organised.

18th Lapikoko Eguna
In the entrance hall to San Antontxu, a gastronomic competition is held that aims to encourage the slow food philosophy, highlighting a product that is extremely tasty and deeply rooted in the region: the haricot bean. At the same time, the solidarity nature of the people of Mungia is shown at these culinary conferences as every year, the NGO Gizaberri sells rations of haricot beans to raise money destined to develop solidarity projects in Benin in Africa.

18th Basatoste
At Carnival time, there is also the classic festival of Basatoste or Txitxiburduntzi Eguna, a breakfast that has been held for many years after a walk through the mountain or the rural paths of the area, the Sunday before Shrove Tuesday. It is a religious pilgrimage to be enjoyed with friends and family.

June
29th San Pedro
The Mungia local patron saint festivals are held around San Pedro’s Day. Notable activities include the txupinazo and the descent of Mari Jata which mark the beginning of the festival, the day of the farmers, the day of San Pedro, the day of San Pedrotxu (30th June) with activities for young people, the omelette competition, and other traditions such as Nagusien Eguna, Umeen Eguna and at the end of the festival, Sukalki Eguna (the most important, popular meat stew competition).

WEEKLY MARKET
Many people from Mungia go to the weekly market held every Friday in Andra Mari. At this market, the villagers of Mungia and the surrounding areas sell their products thereby encouraging the consumption of local food. Products such as vegetables, haricot beans, marmalades and cheeses, among many others, are what can be found every week in Mungia.

LIVESTOCK TRADE FAIR
On the first and the third Sunday of the month, the trade fair site in Mungia fills up with the best animals. It is an event that has become a symbol of identity for the municipality, as Mungia is the only town in Bizkaia that maintains the livestock trade fair all year round. The trade fair is notable for cattle, but you can also find horses, donkeys, sheep and goats.